After watching animals for five days in Africa, the one thing that really struck me is how similar humans are to wild animals.  The behavior, the politics of a herd, the culture, and the fierce protection of the family and the young.

The animals create intricate path systems through the savannah.  They use known routes to travel from one place to another.  The stronger, larger, animals make the paths and all animals use them.  Think human highways and roads?  The young male white rhinoceros stays with his mother for two years until venturing out on his own, to find his own territory, to make his own life.  The young female white rhinoceros stays with her mother for three years, waiting to meet a male.  If, after three years she hasn’t met a mate, she ventures off on her own.  Think teenagers in the US?  Female lions hunt and bring kills back to the dominant male lion to eat.  Think wife pre 20th century?  Males of all animal species fight each other to demonstrate who’s stronger.  The female animals are attracted to the winners and congregate around the dominant males of the herds.  They feel more protected and know they will be provided for.  Think men fighting, showing off their money and success?  Think women’s attraction to those qualities?

We’re not that different.  We do have common ancestors.

My brother and I traveled to Iceland… primarily to see the Northern Lights.  We specifically traveled to Iceland during the winter because there is more darkness, and a greater chance to see the Lights.  However, unbeknownst to us, they are much harder to see than we thought, primarily because of the erratic weather and cloud cover in Iceland.  To see the Lights, you need clear skies, and people across the country constantly check maps like the one below for the most up to date information about the Lights: 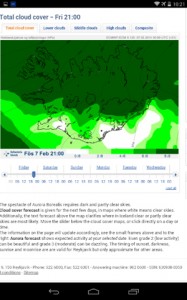 On our first night, we paid for a tour which drove us outside the city and into the dark countryside, in an attempt to see the Lights.  After many hours of waiting in the bitter cold, we “saw” them.  On this night, the Lights appeared as a cloud-esque, white, hazy, light, in the night sky.  On this night, the Lights were definitely not green, or yellow, red, or any other color that you may have seen in a picture.  With the naked eye, it looked like a white, light polluted, cloud.  BUT!!  With a camera and a 15 second exposure, they looked like: 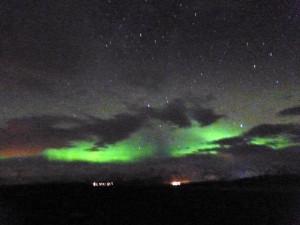 I would say, the picture is pretty incredible.  But, like I said, none of the green in the above picture is visible with the naked eye. My brother and I felt like the Lights were the biggest scam ever.  You can only “see” them with a camera??  Unbelievable.  We talked to a dozen people, and their opinions on the Lights ranged from, “yep, the Northern Lights are a scam,” to “you know when you’re seeing the Northern Lights, it’s incredible.”  Later in our trip, determined to see the “actual” Northern Lights, my brother and I took our rental car, checked the map above, and drove around Iceland to find the most opportune location to see the Lights.  We sat in our car for a few hours, staring at the sky, and saw nothing.  We then noticed tour buses driving by our parked car in droves.  Knowing that the leaders of the tour buses know more about the Lights than we ever will, we followed the buses in our car.  We tailed the buses for miles down the road, pulled off the road with them, and watched the night sky.  Finally, we saw the Lights in all their glory. It was incredible.  The pictures below are representative of what you can see with the naked eye: 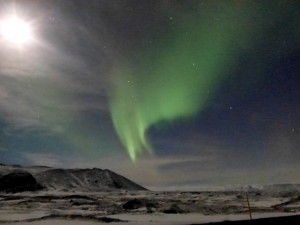 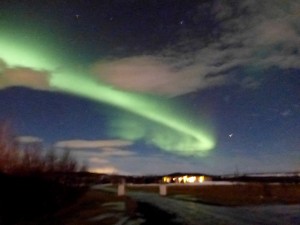 Truly, a natural wonder of the world.

Jerash, Jordan.  A small town to the North of Jordan’s capital city, Amman, on the way to Syria. The city of Jerash contains fantastically preserved Roman ruins, which tourists, including my friend and I, traveled to see. We stayed overnight in a small four bedroom hotel, and while exploring the city at night, saw no other westerners and acquired countless stares from the locals. Jerash is one of the more remote places I’ve traveled to in a foreign country. The hotel caretaker was an immigrant from Oman, and that night he wanted to practice his English with us.  Not an atypical request when traveling.  Mohamed Morsi was just ousted from his presidency in Egypt a few weeks before our trip, and the caretaker from Oman was quite peeved. He explained to us that if democracy were to take hold in the Middle East, you have to allow the elected President to complete his term.  For better or for worse.  “If you don’t like him, that’s OK. Don’t vote for him at the next election, but you can’t stage a military coup every time a president isn’t doing exactly what you want. Like in America, the election of Obama was close, but the voters that didn’t vote for him peacefully accepted the outcome. They will wait and vote for someone else in four years.”

The ideas of voting and democracy are not bound by country, creed, or culture.  Maybe it was right to oust Morsi, or maybe it wasn’t.  I don’t personally know everything that happened in Egypt.  But, the ideas of fair elections and the rule of law are in the forefront of the minds of many people across the world.

Sometimes when traveling, you hear, “it’s just another city”, or “same same.”  And, a lot of the time, I agree.  But, sometimes there’s a city that’s so unique, and amazing, you think, wow, this is NOT just another city.  Italy had two atypical and unique cities for me.  Venice and Rome.

Venice is truly unique in the world.  A city on water.  Endless meandering streets between buildings, the only mode of transportation by foot, or boat, via wide and winding canals, it’s a completely unique architecture.

The city of Rome isn’t unique like Venice, but it’s filled with so many structures, built thousands of years ago, that it’s truly awesome – inspiring awe.  The Colosseum, Trevi Fountain, the Pantheon.  A daily life surrounded by incredible history.  The buildings make you feel small.

And, then there’s the Vatican.  A quasi part of Rome.  The line to enter the Vatican is longer than any line I’ve seen, but it’s worth it.  Hands down, the most incredible building I’ve ever seen in the world is St. Peter’s Basilica.  It makes you feel the presence of God. 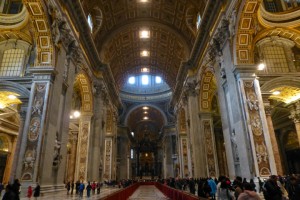 Venice and Rome are not just cities.  They are experiences.

My favorite experience in Vietnam was visiting the Hmong people in Sapa.  Their life and world is so unique and so different than my own it’s almost unbelievable that our two worlds exist on the same planet.  In the below pic, we are standing among some of the grown women of the village, i.e., they are short: 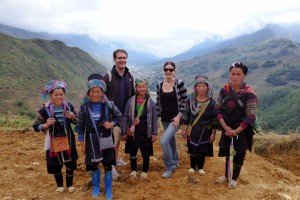 They live in Northern Vietnam, next to China, and over the centuries, they’ve built spectacular terraces to grow rice and feed the surrounding villages. 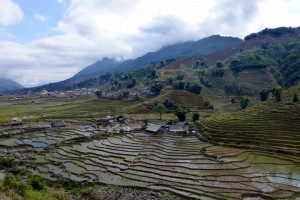 I asked our guide (woman to the right of me in the above picture with the green head scarf) how they grow and harvest the crops.  She said there are multiple rice harvests per year. The villagers walk the roaming buffalo across the terraces to perform the function of plowing.  They plant the rice, divert the river to keep water flowing into their patties, and everyone helps.  She said it’s hard work.  She lives in a village with minimal electricity and running water, when she says something is hard work, it must be incredibly hard. 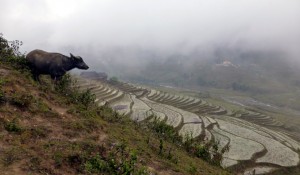 I asked her what is the furthest place she’s traveled to, fully expecting an answer of no further than Hanoi (closest big city) or China, which is about 20 miles away.  Her response shocked me.  She said she’s never been out of the valley we were in!  The furthest place she ever walks, is to the hotel where she picked us up, on foot, to trek us down to her village. Ten miles max.  Such a different world than my own.  I literally took planes, trains and automobiles, in that order, and traveled thousands of miles to stand in a valley that she’s never left.  I wonder what she thinks of the tourists visiting her village, taking pictures and leaving.  I wonder if she realizes her world is so different than the rest.  I wonder what she thinks when she sees a commercial on TV of cities, buildings, or air planes.  Things that she has never seen in person and may never see in her lifetime.  I can’t think of anything comparable to my own life.  Of all the places I’ve lived, no one’s visited to take pictures of my daily life.  Everyone knows how I live.  I can’t think of something I’ve seen on TV that I’ve not seen in real life.  The moon?  Other countries?  I’ve never seen the moon up close, but I believe people have been there and come back.  I haven’t been to all the countries in the world, but I understand geography and the distances between these places.  She has never seen a city, where billions of people on this planet live.  I wanted to speak with her more, but the language barrier became too great.  Maybe the outside world is not her concern.  She married at 17, has a child, is now 20 years old and has another baby on the way.  She’s worried about feeding her family, she probably doesn’t care that cities and planes exist.  How is that going to help her in her daily life? 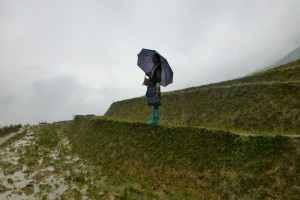 I just love this picture.