Why are you going to Russia, they asked?  Don’t you know you’re going to be followed, captured, or worse?  Also, don’t take pictures of buildings or you will be arrested.  You’ll have to pay off the police.  Your phones will be hacked.  Do you know anyone there?  Why go? What’s there?  Well… that’s what I wanted to find out! 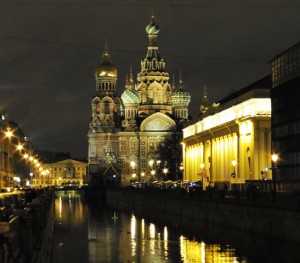 Second stop, Moscow.  A lesson in Soviet History and present day Russia.  Below is the tomb of Vladimir Lenin.  The text is the Russian cyrillic characters.  Those were fun to learn and read.

The Russian people I met were very nice.  Also curious that a young American was actually visiting Russia for something other than business.  Moscow has a similar feel to New York City.  The food was familiar and fantastic.  People complain about how cold it is.  There are Starbucks, McDonalds, and even a Krispy Kreme!  In short, it didn’t seem that different than American life.  At least day-to-day.  However, their leaders are not as tolerant.  Our countries are at odds in Syria.  The U.S. intel community is certain Russia hacked into American politics.  And we happen to be the two nations in control of virtually all the nuclear warheads in the world.  Things could be better.

Coincidentally, when I returned to the U.S., I read a National Geographic Article about why the young generation was pro-Putin.  I would say the generalized American perception of Putin is that he is evil, oppressive, and the Russian people want him out of power.  However, the NatGeo article describes how he is generally liked in Russia.  A brief history of Russia since is Soviet days: the 90s were terrible, Putin assumed power in 2000, and since then people have more money, unemployment is down, and some of Russia’s “prestige” has been restored.  Whether or not that was solely Putin’s doing is debatable.

What am I getting at?  It seemed far from the “bad” place that everyone described to me before going.  I never felt in danger.  No one followed me (that I know of).  I took hundreds of pictures of many things with no consequence.  No bribes.  No phones hacked (that I know of).

To see it for yourself!