Do you think about which side of the sidewalk you walk on? Or does it come naturally? The Japanese walk on the left side, so I either have to THINK about moving to the left (I’m getting better) or run into endless amounts of people when I’m walking, and there are a lot of people here.

When you cross the street, which direction you look?  Left.  Do you think about it?  No.  Because we’ve done it a bazillion times and that’s where the cars are coming from. In Japan, you drive on the left, so the cars come from the right.  When I cross the street now, I look both ways, five times because I can’t remember.

If your friend’s driving you somewhere and your approaching their car, which side do you go to to get in? The right side. I can’t tell you how many times I’ve walked to the right side, only to be politely told by the driver to go to the other side (steering wheel is on the right side of the car in Japan).

The strangest habit that I’ve encountered is responding in Portuguese or Spanish when someone starts speaking to me in Japanese. I lived in Brazil for 7 months and SoCal for 5 years, so I guess my mind is trained to think “ah! Someone is speaking to me in another language! Respond in Portuguese/Spanish! Do it now!”  I don’t respond in full sentences or anything, but I’ve caught myself saying “si” (yes) or “e” (and), which is just weird.

The last, and most annoying one of all.  In Japan, the toilet is not in the bathroom.  It has its own room: 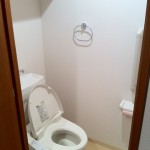 I’ve walked into the bathroom SO many times wanting to use the toilet, only to turn around to head to the little toilet room.  It’s interesting what the mind does for you without having to consciously think about it, until you move to another country.

2 thoughts on “Creatures of Habit”

This site uses Akismet to reduce spam. Learn how your comment data is processed.